Edenbrawl is the first game in the Sparkadia ecosystem, combining the action combat of a brawler with the endless depth of a MOBA to create a “Mobrawler”, a unique experience that grips you match 1 and keeps you engaged at match 10,000. With intense WASD skill-based combat, unique hero playstyles, streamlined player agency, and tactical game modes, Edenbrawl creates an addicting multiplayer experience where no match is like the last.

Edenbrawl features top-down gameplay where players control a single hero in objective-based maps similar to MOBAs such as League of Legends, DotA2, or Heroes of the Storm. Edenbrawl is unique to those titles, however, in that players use WASD to move and there are no minions or lane-pushing modes. While the core gameplay does not include the typical lanes and jungles players are accustomed to, it does include several traditional MOBA mechanics such as spells, items, talents, and more.

Edenbrawl is designed to be significantly faster and more action-packed than traditional MOBAs. Combat is intense and relies heavily on skill shots, dodging, and outplaying your opponent rather than farming minions 90% of the time!

Edenball is the primary game mode focus and the special sauce behind Edenbrawl. It's a unique blend of Capture the Flag, FIFA, and intense brawler combat where teams of 5 work together to grab a ball in the center of the map and carry/pass it to score in the enemy team's endzone.

While scoring the ball is the primary victory condition, there are multiple ways to do so. Edenball is an intense back and forth where teams can focus on brute team fighting force, secondary objective focus, or precise positioning and passing to come out on top. 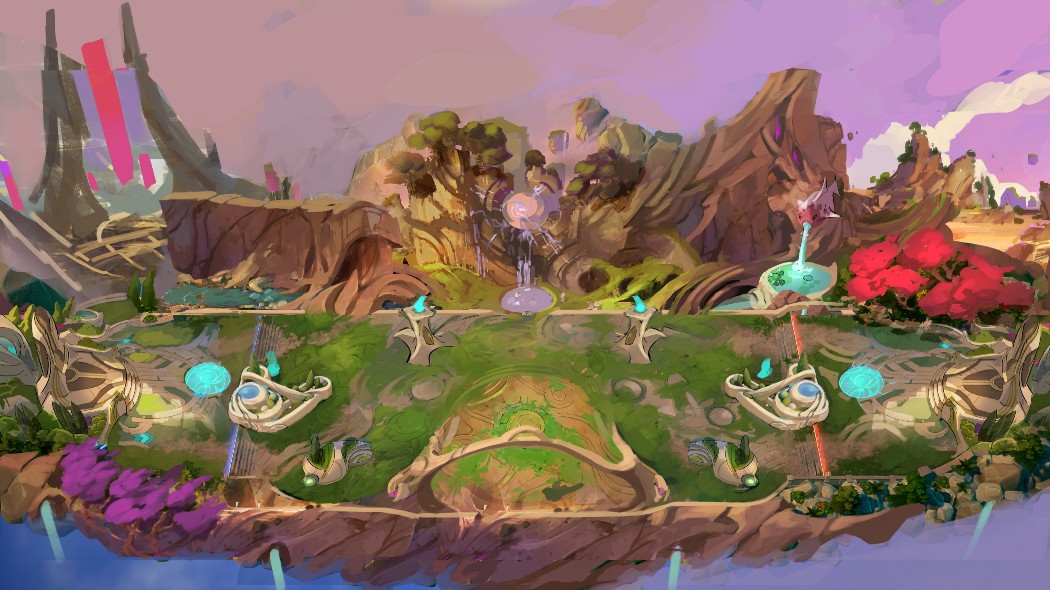 The Ball and Scoring

While it's easy to get distracted, it's important to always keep an eye on where the ball is on the map. The ball initially spawns in the center of the map and can be picked up by walking over it. Players are able to move freely while possessing the ball and can also pass it to their teammates using direct or lob passes.

To score, players can either throw the ball into the endzone or walk into the endzone while carrying the ball. Edenball works in a round-based format where teams much reach a certain number of points to win the round. It's the best of 3 rounds and between each round, there's a short shopping period along with special unlocks to make each round unique!

While carrying the ball, you'll gain access to a few new abilities based on your hero's role, and more importantly, the ability to pass the ball. There are two types of passing, driven and lob. Driven passes are charged skill shots where you'll charge up the power behind the pass, with the pass traveling along the ground in the selected direction. Lob passes are also charged, but can be targeted into a specific area. Properly utilizing the speed and accuracy tradeoffs of both of these passes is key to the teamwork required for scoring the ball!

While carrying, you'll maintain a separate bar called 'Fatigue'. Taking damage or being CC'd while carrying increased your fatigue. Once you reach 100% fatigue, you'll become "Broken" and be forced to drop the ball shortly after!

Edenball features a unique mechanic known as the line of scrimmage which serves as a territory marker. Each team has its own independent line of scrimmage that starts at the middle of the map and resets each score. It can be pushed by possessing the ball and moving near the line, similar to a payload. The line stops moving when you lose the ball or are no longer in range of the line.

As you push the line, your team's territory expands. You gain special benefits in your territory, namely a role-specific aura while carrying the ball. For example, support heroes emit a healing field around them while carrying, but the moment they cross over into enemy territory, the aura goes away.

As your territory continues to push, you'll begin disabling the special base defenses the enemy is equipped with at the start. While breakaways can and do happen often, it's typically wisest to work with your team to push the line first, expand your territory, and disable these defenses before making your daring attempt to score! Finally, just because you don't score your first push, your territory stays expanded, meaning the progress you've made will pay off next time!

Ever played Super Smash Bros with items on? Or enjoy that uber-satisfying blue shell pickup in Mario Kart? Now imagine that random question mark box popping up in Edenbrawl. Across the map, players can acquire unique pickups like grappling guns, jump boots, or even a baseball bat to swat someone straight off the map!

In between rounds of an Edenball match, teams get a chance to vote on roguelike style buffs which affect the next round in unique ways. For example, one blessing may simply provide defensive walls around your endzone while another may completely alter the map, opening up new strategies and tactics

Augments are special talents that a hero unlocks throughout a match. They are typically hero-specific, but there are role-specific and general augments that are available to all heroes. Augments add an extra dimension to hero customization throughout each match, allowing a single hero to adapt multiple ways both to your playstyle or for the needs of the team!

No MOBA-style game is complete without heroes and Sparkadia's are front and center. In Edenbrawl, players pilot a Hero of their choice, all equipped with an array of abilities to duke it out in the arena. With the action-oriented brawler-style combat combined with the unique ball mechanics, hero design grows even more new legs, with countless intricacies and interactions for players to discover.

Edenbrawl is a 100% free-to-play (F2P) game with absolutely zero pay-to-win (P2W). All purchasable items, both off-chain and on-chain are strictly cosmetic. Players cannot purchase anything that would provide any sort of advantage over other players.

All content on this page is based on and/or taken from the game's original documentation/whitepaper. Play Portal shares Blockchain games so its readers can get knowledge about the top games available on the market.

Edenbrawl is yet to be released, but don’t worry, we will update this page to provide you with all the information necessary to join the brawl as soon as possible!

Edenbrawl combines the action combat of a brawler with the endless depth of a MOBA to create a “Mobrawler”, a unique experience that grips you match 1 and keeps you engaged at match 10,000.